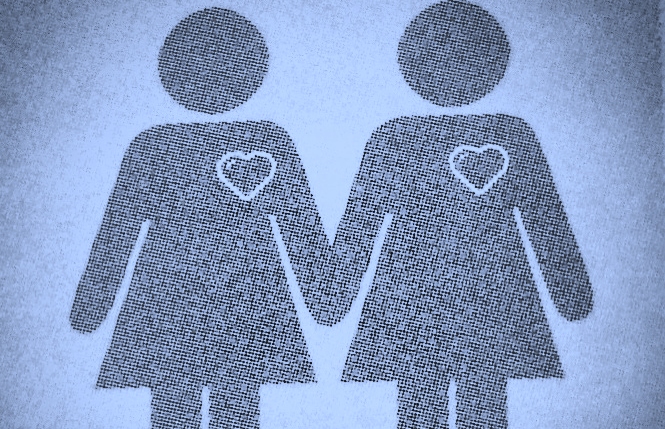 I’d like to offer a hypothetical. It’s before U.S. v. Windsor, before section 3 of DOMA is struck down and immigration doesn’t recognize same-sex marriage petitions. I’m a gay foreign national male from Peru who enters the U.S. on vacation and I want to stay. I have a passionate love affair with United States citizen and famous actor Ryan Gosling – naturally – and learn that he wants to marry me and make me a legal resident. Unfortunately, Ryan can’t file for me under pre-Windsor law. I’m left demoralized and undocumented.

Months later I meet a female interior designer and United States citizen, Grace. Grace and I become best friends. We live together in an apartment often visited by our flamboyant and hilarious friend, Jack. Grace decides she wants to marry me so I can have a more comfortable life with health insurance, dental, vision, pension benefits, social security, and tax benefits. She also wants to give me a green card. I am so touched by this generosity, I agree to give her the baby she always wanted. While unconventional, this relationship suits us perfectly.

We get to my immigration interview and the officer asks us separately which side of the bed we sleep on (very common question). We don’t sleep in the same bed so we flub this and a few other intimate questions. An investigator later shows up to our condo and asks the concierge and neighbors about us and we’re outed as apparent roommates not a couple. Someone even said they saw me holding hands with Ryan Gosling in our lobby. Application denied for suspicion of fraud. We sadly move on.

Now Windsor comes along, Section 3 of DOMA is stricken. I immediately divorce Grace, marry Ryan , and he files a visa petition on my behalf. We get through the interview process and in 2 weeks I open the mail and what do I find? A notice of intent to deny. Why? Section 204(c) of the Immigration and Nationality Act (INA).

Marriage fraud or a denied visa petition based on the suspicion of marriage fraud has draconian consequences. Under INA Section 204(c), an I-130 immigrant petition found to be based on a fraudulent marriage will not only be denied, but no subsequent petition shall be approved if (1) the alien has been accorded, or has sought to be accorded, immediate relative status as the spouse of a U.S. citizen (USC) or preference status as the spouse of a lawful permanent resident (LPR), by reason of a marriage determined to have been entered into for the purpose of evading immigration laws; or (2) the alien has attempted or conspired to enter into a marriage for the purpose of evading immigration laws.

My second marriage to Ryan is not fraudulent. However, USCIS will deny this second I-130 based on INA 204(c) because the finding of marriage fraud in the first I-130 is a bar to the approval of a subsequent I-130. Such is the lasting effect of a finding of marriage fraud. What if I never marry Ryan but my USC parent files an I-130 for me? This I-130 cannot be approved because the prohibition under INA 204(c) covers any type of petition, whether family based or employment based.

However, there must be evidence of such fraud or attempt or conspiracy documented in the immigrant’s file. Such evidence must be substantial. In Matter of Tawfik, 20 I&N Dec. 166 (BIA 1990), the Board of Immigration Appeals (BIA) ruled that in determining whether a prior marriage would bar a subsequent petition under INA 204(c), the adjudicator in the second petition should not give conclusive effect to determinations made in the first petition but should reach an independent conclusion based on any relevant evidence which may include evidence originating in the first petition. In Matter of Tawfik, the evidence in the first petition showed that it could “reasonably be inferred” that the beneficiary entered into a marriage for the primary purpose of obtaining immigration benefits. The BIA held that such reasonable inference does not rise to the level of substantial evidence. There has to be an affirmative finding that the marriage was entered into for the purpose of evading immigration laws.

In Matter of Isber, 20 I&N Dec. 676 (BIA 1993), the BIA recognized that there might be cases where a petitioner files an I-130 for a spouse but fails for some reason to establish a bona fide marriage and later files a second I-130 with more evidence that convinces USCIS that the marriage is bona fide. This second petition should not be denied based on INA 204(c). However, this exception recognized in Matter of Isber is difficult to establish. If there was evidence of marriage fraud in the first I-130, the petitioner and the beneficiary have a heavy burden in the second I-130 of proving that the marriage is bona fide. A finding of marriage fraud is a permanent obstacle to any future immigrant petition. Under certain circumstances, a waiver might be available but for the most part, there is no relief for an immigrant who has engaged in marriage fraud.

If you have entered into a marriage which may be deemed to be suspicious and later attempt to adjust status to permanent residency, it is advisable to retain the services of an attorney.