Immigration Reform: A Look Back to The Immigration and Nationality Act of 1965 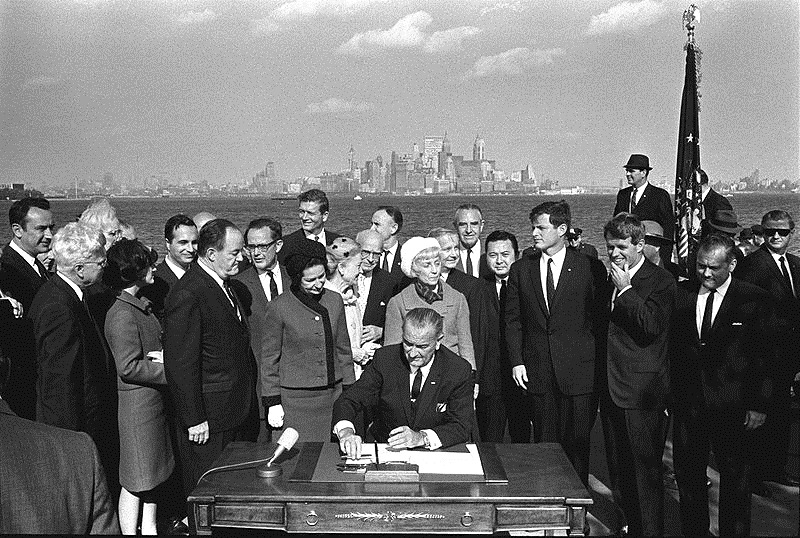 As President Obama weighs sweeping changes to existing immigration policy, nearly all the debate has centered on the problem of illegal immigration. Little discussed are the many concerns of legal immigrants. In order to understand the unique tapestry of today’s America, one needs to look back in time to the immigration trends of the past. As a Miami immigration attorney, this segment of history is profoundly interesting to me.

Our current system of legal immigration dates back to 1965.  It was an important year, and marked a radical break with previous policy, leading to profound demographic changes in America. However, it is important to note that the changes to immigration policy took place during the height of the civil rights movement, at a time when ideals of freedom, democracy and equality had seized the nation. Against this backdrop, the manner in which the United States decided which foreigners could and could not enter the country had become an increasing embarrassment.

By the 1960s, Greeks, Poles, Portuguese and Italians were complaining that immigration quotas discriminated against them in favor of Western Europeans. President John F. Kennedy, in a 1963 speech to the American Committee on Italian Migration, called the system of quotas  ” nearly intolerable.”

After Kennedy’s assassination, President Lyndon Johnson signed the Immigration and Nationality Act. The act was a significant coup for equality. It leveled the immigration playing field, giving a nearly equal shot to newcomers from every corner of the world. The ceremony was held at the foot of the symbolically powerful Statue of Liberty.

The central purpose of the new immigration law was to reunite families.

At this point, it  is interesting to note that Congress, in debating an overhaul of immigration policy in the 1960s, had argued that little would change because the measure gave preference to relatives of immigrants already in America. Another provision gave preference to professionals with skills in short supply in the United States.

Predictions Based on Ignorance?

Expert after expert testified before Congress that little would change. Secretary of State Dean Rusk repeatedly stressed that the number of new immigrants coming to the United States was not expected to skyrocket. What was really at stake, Rusk argued, was the principle of a more open immigration policy.

When asked about the number of people from India who would want to immigrate to the United States, Rusk told the Senate Subcommittee on Immigration and Naturalization: “The present estimate, based upon the best information we can get, is that there might be, say, 8,000 immigrants from India in the next five years. In other words, I don’t think we have a particular picture of a world situation where everybody is just straining to move to the Unites States.”

Even more extraordinary about the 1965 immigration overhaul is the evidence that it was not popular with the public. The change in immigration policy was not borne of people were marching in the streets in the 1960s. Rather, it was really a group of political elites who were trying to look into the future. It was the issue of, ‘Are we going to be true to what we say our values are?’

The influx of refugees and of millions of illegal immigrants over the last several decades have certainly contributed to the United States’ profound demographic transformation. But the chief driver of this change remains the system of family-based immigration put in place in 1965. Over time, in a process critics call “chain migration,” entire families have re-established themselves in the United States.

In fact, President Kennedy’s original proposal made skills-based immigration the priority. However, it is interesting to note that a broad lobby pushed for the greater emphasis on families. It included churches, ethnic groups whose members had family in the old country, and the AFL-CIO.

As the pundits on both sides of the political spectrum discuss President Obama’s use of executive power to bring about immigration reform,  one would be well-served to remember that immigration truly is the backbone of this great country, and what makes us uniquely American.