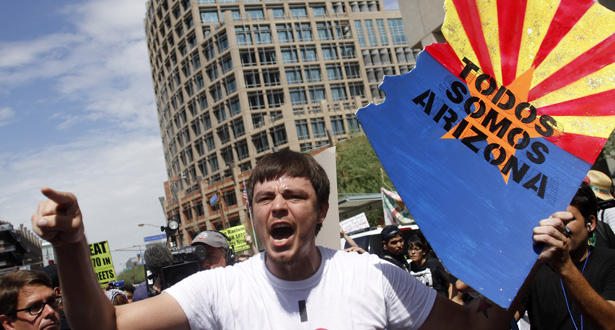 Many Miami immigration lawyers have followed Arizona’s controversial immigration law closely. Arizona’s SB 1070, widely regard as the broadest and strictest anti-immigration measure in recent United States history, requires officers to check the immigration status of anyone they suspect is in the country illegally. Wearing the wrong clothes, speaking with the wrong accent or having the wrong skin color could land you in hot water in Arizona.

This week, a Mexican woman who claims her five-day detention at a federal immigration office was an illegal arrest filed the first lawsuit challenging enforcement of Arizona’s landmark immigration enforcement law.

Cortes was pulled over in Eloy, about 65 miles southeast of Phoenix, as she was driving home and told one of the officers about her visa application but he wasn’t interested in looking at it, according to the lawsuit. She was cited for having a cracked windshield, driving without a license and failing to show proof of insurance. Cortes was taken to a Border Patrol office in nearby Casa Grande.

The lawsuit alleges the officers violated Cortes’ Fourth Amendment right to be free from unreasonable seizures by prolonging the length of her stop after the original purpose of the traffic stop was completed. She alleges the stop was prolonged based on her immigration status.

Cortes acknowledged not being a U.S. citizen, was cited for traffic violations and, as part of enforcing state immigration law, was brought to a federal immigration office so authorities there could determine her immigration status.

Cortes, who didn’t allege racial profiling in her lawsuit, is seeking unspecified damages.

Opponents of the 2010 law have already filed lawsuits that questioned the constitutionality of the law’s provisions, but Thursday’s filing by Maria del Rosario Cortes Camacho marks a new type of challenge that alleges constitutional violations in how a police agency enforced the law.

In the earlier lawsuits over the law, critics said Latinos in Arizona would face systematic racial profiling in the enforcement of the statute and argued that the state law was trumped by federal immigration statutes.

The U.S. Supreme Court has upheld the Arizona law’s most contentious section — a requirement that police, while enforcing other laws, question the immigration status of those suspected of being in the country illegally. But the courts have either struck down or blocked enforcement of other sections of the law known as SB1070, such as a requirement that immigrants carry registration.

After SB 1070 passed in 2010, two dozen copycat bills were introduced in state legislatures across the country; five passed in Alabama, Georgia, Indiana, South Carolina and Utah. The ACLU and a coalition of civil rights organizations have filed lawsuits in all six states.

Laws inspired by Arizona’s SB 1070 invite rampant racial profiling against Latinos, Asian-Americans and others presumed to be “foreign” based on how they look or sound. They also authorize police to demand papers proving citizenship or immigration status from anyone they stop and suspect of being in the country unlawfully.

More disturbingly, there was a marked behind-the-scenes effort to help draft and pass Arizona Senate Bill 1070 by an industry that stands to benefit from it: the private prison industry.

The law could send hundreds of thousands of illegal immigrants to prison in a way never done before. And it could mean hundreds of millions of dollars in profits to private prison companies responsible for housing them.

Challenges to Legality of SB 1070

Since the passing of SB 1070, Miami immigration attorneys have been watching the unfolding of events closely. The American Civil Liberties Union (ACLU) criticized the statute as a violation of the Supremacy Clause of the United States Constitution, which states that federal law, so long as it is constitutional, is paramount over state laws.  Erwin Chemerinsky, a constitutional scholar and dean of the University of California, Irvine School of Law says that “The law is clearly pre-empted by federal law under Supreme Court precedents.”

On the other hand, various legal experts were divided on whether the law would survive a court challenge, with one law professor saying it “sits right on that thin line of pure state criminal law and federally controlled immigration law.”Past lower court decisions in this area were not always consistent and a decision on the bill’s legality from the U.S. Supreme Court is one possible outcome.