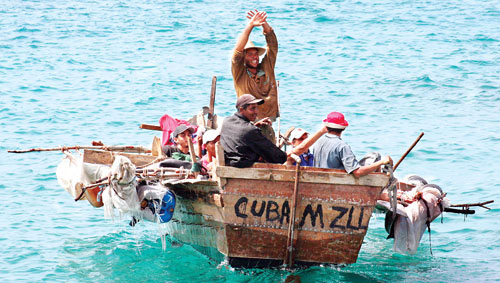 As a Miami immigration attorney, the announcement by President Barack Obama on December 17th, 2014 ordering the restoration of normal diplomatic relations has held significant interest for me. In light of its geographic proximity to the island, Miami’s Cuban community has grown to become the largest in the continental United States.

President Obama’s recent announcement has stoked fears among many Cubans that this generous immigration policy will be modified. This has spurred many Cubans who had been contemplating departure to hasten their plans, and leave as soon as possible to the United States before any modification in the law. Many Miami immigration lawyers, myself included, have seen an uptick in questions from Cuban nationals as to their immigration status.

According to the United States Coast Guard, the number of Cuban migrants attempting to reach the U.S. illegally in rafts has surged since the Dec. 17 announcement that diplomatic relations between the two countries would be restored after more than 50 years.

On the homefront, Republican Congresswoman Ileana Ros-Lehtinen of Florida said that she believes there will be a modification of the Cuban Adjustment Act, however such change would require the passage of new legislation, which  never comes easy.

The Cuban Adjustment Act that has provided Cubans with a virtually guaranteed path to legal residency and eventual citizenship now hangs in the balance.  The journey that hundreds of thousands of Cubans have taken to reach American soil was previously made with the knowledge that they would not be deported.

If you think would like more information on the Cuban Adjustment Act, and how any potential changes could affect your immigration status, please contact Miami immigration attorney Michael G. Murray, Esq. at (305)895-2500 or visit our website at www. mmurraylaw.com