Citizenship Through Joining the U.S. Military 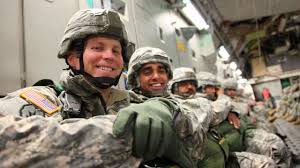 Today, I would like to touch upon the program known as Military Accessions Vital to the National Interest (MAVNI), which is offered by the U.S. Military. Below are some frequently asked questions about MAVNI.

MAVNI is a military enlistment program for immigrants with specialized skills. It provides certain legal non-citizens with the opportunity naturalize as United States Citizens.

How do I qualify for MAVNI?

In order to qualify for MAVNI, individuals must meet the following requirements, including, but not limited to:

If you have any questions as to whether you qualify for MAVNI, it may be in your best interests to speak with a Miami immigration lawyer to discuss your options.

How will the authorities know if I am really proficient one of the 44 listed languages?

You will be tested for language proficiency.

How and why was MAVNI created?

MAVNI was created to encourage the recruitment of qualified healthcare professionals. The Office of the Secretary of Defense authorized the start of MAVNI as a one-year temporary program. After MAVNI was initiated, it was put on hold for two years while mandatory enhanced security screening measures were put into place. MAVNI was renewed on September 27, 2012 for two additional years. Currently, the program is up for renewal again. Would-be applicants should take note that MAVNI cannot be made a permanent program. Why? Because in peacetime, there is no means for non-green card holders to naturalize. Only during wartime can non-green card holders naturalize.

Is MAVNI still an active program?

Yes. As of the date of this blog, the military has expanded MAVNI. The original cap of 1,500 slots has been increased to 3,000 slots for this fiscal year. This expansion will be followed by another increase to 5,000 in 2016. However, if you have any questions as to eligibility, you should consider speaking with a Miami immigration lawyer to discuss your options.

What are the benefits of MAVNI?

MAVNI provides qualified applicants with a way to bypass the Green Card process. It also provides applicants with all the benefits of any other enlisted soldier. Upon graduation from basic training or after being commissioned as an officer, the applicant would become a naturalized citizen. Before applying for MAVNI, however, it would be prudent for you to speak with a Miami immigration lawyer to discuss your options.

Who is the typical MAVNI applicant?

Again, in order to qualify for MAVNI, applicants must:

Applicants may be licensed doctors, nurses, dentists or other health care professionals. In the alternative, an applicant must fluent in one of more than 40 key languages such as Chinese, Persian, and Urdu.