Applications for DACA and DAPA to Start Early 2015 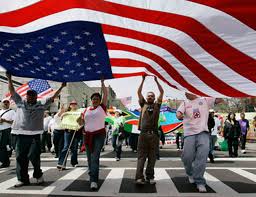 As a Miami immigration attorney, I have been closely following the news surrounding President Obama’s Executive Action on immigration of November 20th, 2014.

In a conference call to Spanish-speaking reporters, Leon Rodriguez, Citizenship and Immigration Services director, indicated that immigrants should be able to start applying for deportation relief and work permits beginning February of 2015.  Those applying for expanded Deferred Action for Childhood Arrivals ( DACA) should be also to do so in February of 20145. Thereafter, parents of U.S. citizens and legal resident children should be able to begin applying in May of 2015.

If you think would like more information on President Obama’s executive action of November 20th, 2014, please contact Miami immigration attorney Michael G. Murray, Esq. at (305)895-2500 or visit our website at www. mmurraylaw.com